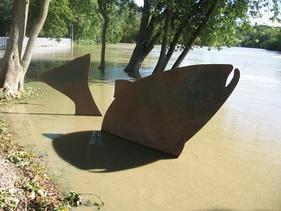 The high waters caused by the Irene hurricane in 2011 surround two of the STEELHEAD fish on the Winooski River which divides the cities of Burlington and Winooski, Vermont

All five STEELHEAD fish, my first public sculpture, were originally installed in 1981 in the Winooski Falls Park near the bridge connecting the two cities.

They were removed in 2002 because of new construction near the sculpture. They are now reinstalled along the new Winooski River Path.